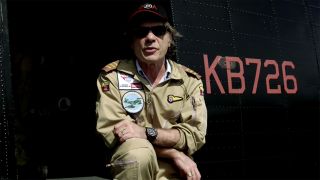 Iron Maiden have released a video showing frontman Bruce Dickinson taking to the skies in a Avro Lancaster.

The singer, pilot and aircraft enthusiast had the opportunity to step into the World War Two heavy bomber in Canada back in July 2017 when he visited the Canadian Warplane Heritage Museum in Ontario.

The band were on their mammoth Book Of Souls tour at the time – a trip which saw Dickinson fly the band around the world on Ed Force One.

“We are going to be flying in this magnificent Avro Lancaster which is one of only two still flying in the world, says Dickinson in the clip.

“This one has by far the easiest access. This particular museum is extraordinary – it’s got such great passion for the planes that it maintains here, all of which are very historic and very relevant to Canada and the Commonwealth.”

Describing the takeoff, he adds: “It’s like a symphony of metal, then it just settles down into a really menacing growl.”

The backing track to the video? It’s Aces High of course. Check it out below.

Iron Maiden are currently in Canada on their Legacy Of The Beast North American tour and will play the Videotron Centre in Quebec later tonight (August 7) on what is also Dickinson’s birthday.

Later this year, Dickinson will head out on a spoken word tour across Europe.