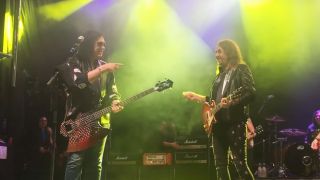 The concert at CHS Field Stadium in St Paul, Minnesota marked the first time that Simmons and Frehley had played together in public since 2001 – and they ripped through classic Kiss tracks Parasite, Cold Gin and Shock Me.

The concert was organised to raise funds for the charity MATTER, who work in partnership with on-ground relief organisations to source and ship the items needed most in the affected areas devastated by the recent hurricane.

Earlier this year, it was confirmed that Simmons had co-written two new tracks for Frehley’s next solo album.

Frehley later told Eddie Trunk: “I just shot him an e-mail and said, ‘C’mon, let’s write some songs together for my new record. Next thing you know, he’s down here and within three hours we had written two songs together, which was, like, a record, for me and him.

“We had a fantastic time. He came down. We ate in the backyard while I was watering my palm trees. He was going to my fiancée Rachel, ‘This is something new I’ve never seen before.’ He’s eating a sandwich and I’m watering a palm tree in my backyard. But it was a lot of fun.”