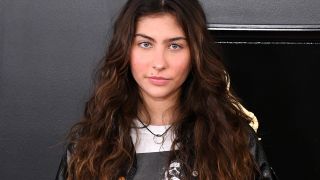 Toni Cornell, the daughter of Chris Cornell, has played an acoustic version of Temple Of The Dog classic Hunger Strike to raise money for charity.

The 15-year-old appeared on LiveXLive’s Music Lives event over the weekend, which was set up to raise money for the MusiCares COVID-19 Relief Fund. The fund is helping to support artists who are struggling financially due to the coronavirus lockdown.

Introducing her performance, Toni said: “I’m sitting in my dad’s studio during this crazy time and I’m going to sing one of my favourite songs for you. I love you daddy and I hope I do this some justice.”

Watch a video of Toni playing the song below.

Last year, Toni released a track titled Far Away Places which she recorded with her father in February 2017 – just months before his death in Detroit at the age of 52. All proceeds from sales of the song went directly to the New York Society For The Prevention Of Cruelty To Children.

And in 2018, a duet featuring Toni and Chris covering Prince's Nothing Compares 2 U was released to coincide with Father’s Day.