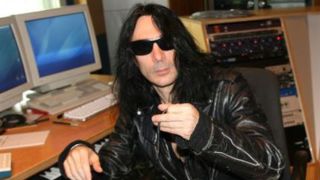 Virgin Steele say they are working on new material and hope to release it early next year.

And frontman David DeFeis reveals the as-yet-untitled album and follow-up to 2010’s The Black Light Bacchanalia will have a similar vibe to their mid-80s recordings.

He says: “It’s a very heavy, non-concept type of album in the vein of Noble Savage or Age Of Consent, where there’s no particular story. It’s a straightforward collection of songs that work well together. It’s about 80-90% tracked already and final mixing will begin next month.

“With these new recordings, we’ve gone back to some earlier methods of recording such as using analogue tape – the whole thing sounds and feels very organic.The group and I are really happy with the new material and we’re sure all the fans who waited so long will be more than pleased.”

Virgin Steele had previously announced a box set would be released this year. Now DeFeis says those plans have been put on ice while they finish the record.

He continues: “I know we announced a box set was to be issued this autumn, which in addition to two more reissues would have included a bonus album called Ghost Harvest, but we feel the time is right for some brand new US metal.

“The new album is our focus but the box set will be released later next year – most likely a short time after we issue the new release.”

Earlier this year, SPV/Steamhammer re-released The Marriage Of Heaven And Hell I and II along with Invictus. Both double CDs came with bonus material and previously unpublished pictures. Their new album is pencilled in for a February/March release.