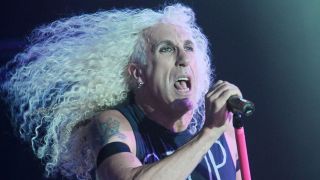 A member of Twisted Sister’s road crew has described Canada’s Amnesia Rockfest as the “worst festival ever.”

The veteran band’s tour assistant Terry Sapp says in a blog post that the band’s experience at the event in Montebello, Quebec, last month was a disaster from start to finish and blames it on the alleged incompetence of the event’s staff.

Twisted Sister performed on the Jagermeister stage at the festival on June 24 and Sapp says the band faced a two-and-a-half hour trip from their hotel to the site before being given too few backstage passes to accommodate their entire crew.

It was Twisted Sister’s last ever performance in Canada before they draw the curtain on their 40-year career.

He goes on to talk about the dressing room, which he says was a 10x10 space for 23 people. And Sapp says that the rider for that number of crew consisted of “a dozen small water bottles, five bags of chips, three granola bars, a couple of tiny toffee candies and a pack of something… I think it was gum.”

Sapp claims he had to make the final leg of the journey to the site by boat.

He adds: “We had nowhere to set up – nowhere to store our gear, nowhere to work. And from what I saw and experienced personally, some of their local crew treated us as if we were just the neighbour’s kids playing air guitar on tennis rackets.

“In the six years that I have apprenticed with the crew, I have never experienced such a lack of respect. In short, they sucked balls.”

According to Sapp, Twisted Sister’s set was cut short by organisers, meaning they only played seven songs.

“Seven songs,” he says. “Seven damn songs. And those fans rocked out hard every single song, every single note. They waited all day in the sun to hear these songs for the last time, and Canadian SMFs, we salute you.”

In a final address to the Amnesia Rockfest organisers, Sapp says: “Fuck your boat, fuck your tiny-ass stage, fuck your 45 minutes and fuck your five bags of chips. We’re going back to Europe and playing the real festivals.

“Canadians rockers, go to Heavy Montreal next year instead. This festival doesn’t deserve your attendance.”

Twisted Sister’s Forty And Fuck It tour continues this month.