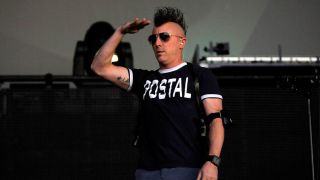 Maynard James Keenan says his upcoming biography won’t be full of “the kiss-and-tell crap” that often appears in similar memoirs.

The Tool, A Perfect Circle and Puscifer frontman will publish the title in mid-2016 via Backbeat Books. It’s being written in collaboration with his friend Sarah Jensen.

And while there will be plenty of never-before-told stories from throughout his life, he’s aiming to avoid idle gossip and produce an honest memoir like David Bowie’s.

Keenan tells Rolling Stone: “Most people want to hear the kiss-and-tell crap, the garbage on the bus. That’s boring to me. ‘We threw a piano out a window.’ That’s been done a million times before even Buddy Rich was around.

“The ones I prefer are when they get more into the psychology and the decision-making process. Not who you know and ‘then I met the president.’ – those are boring. I’m more interested in crossroads, where they make a decision and you see the cause-and-effect process of those decisions.”

Tool continue work on their long-awaited sixth album. Over the past year bandmates Adam Jones and Danny Carey have said music has been written. Asked to comment, Keenan “Do I seem like a lazy person to you? They’re working hard in their own way, I’m working hard in my own way, and I’ve got nothing for you.”

Tool work to speed up after 8-year legal fight ends