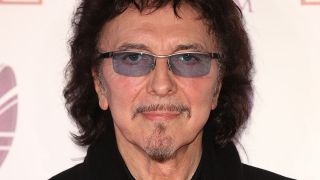 Earlier this month, it was announced that Black Sabbath’s home city of Birmingham would honour the band at a ceremony on February 9.

The day will see a bridge named in their honour on Broad Street, a Sabbath steel bench unveiled, and drummer Bill Ward will be awarded his own star on Birmingham’s Walk Of Stars.

Now the West Side website has confirmed that guitarist Tony Iommi will attend – although Ward, Ozzy Osbourne and Geezer Butler won’t be able to make it.

Iommi says: “I have to say, Black Sabbath fans are absolutely amazing – and I can’t thank you enough for all the support you’ve given us over the years.

“We’d also like to thank Birmingham council who have been putting this project together, which has involved so many people and a lot of hard work.

“I’ll be there in Birmingham on February 9 for the bridge naming, the bench unveiling and also the star presentation, which will be Bill Ward’s star.

“Unfortunately, Bill, Ozzy and Geezer won’t be attending that day because they have other commitments. But if you don’t mind putting up with me, I’ll be there!”

The bridge was spearheaded by Sabbath fan Mohammed Osama, who said: “I’m thrilled that my plan to pay tribute to Black Sabbath in their home town has finally reached this presentation stage.”

The bench was created by Egyptian artist Tarek Abdelkawi in conjunction with Etch Components and Gateway Steel Fabricators.

Tickets for the event were sold out within 36 hours of going on sale, with manager of Westside BID Mike Olley reporting: “We knew this event was going to be popular, but we were astonished at how quickly these tickets were snapped up."

Along with the three ceremonies on the day, there will be an interview with Iommi and the opportunity for fans to have their photo taken with the rock icon.

Proceeds will be donated to the Westside Charitable Endeavour.