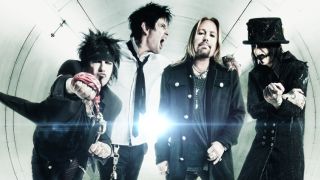 And he reports that bassist Sixx unfollowed him on Twitter the next day.

Motley Crue completed their last tour on New Year’s Eve after signing a legal document making it nearly impossible for them to ever stage a reunion.

Lee tells Rolling Stone: “After the final night we had a big party backstage, and I never saw the other guys. We never even said goodbye. Fucking strange as hell.

“If you’re getting divorced you still give your ex a hug, or flip her off or something. Give me a sign – let me know you’re alive!

“I think fucking Nikki unfollowed me on Twitter the next day. I was like, ‘Wow, okay, dude.’”

The drummer believes his band ended their creative period during the making of 2008 album Saints Of Los Angeles. “Everybody did their part separately,” he says.

“It was a really strange process and I was like, ‘This is not really how it works.’ The record came out okay, but that’s when I started realising we’d kind of hit the wall.

“You need to have three other very open-minded people to continue that process, explore, and take chances. That’s just not happening there.”

Lee – who’s remained in contact with guitarist Mick Mars – has also recalled the moment during the final show when his rollercoaster drumkit failed in mid-air, leaving him hanging upside down above the crowd, in need of rescue.

“We mounted a shitload of wireless cameras and we had conversations before the show, saying, ‘If we get some wireless signals that are crossing, the rollercoaster goes into safety mode, where it just shuts down.’ And that’s what happened. I was like, ‘Fuck, I knew this was going to happen.’”

But the scene is included in Motley Crue’s The End concert movie, which premieres in selected cinemas on June 14 before a later DVD release.

Asked why it made the final cut, Lee says: “Because it was actually entertaining.”