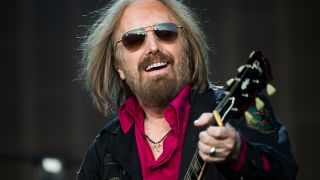 The family of Tom Petty have issued a cease and desist notice to Donald Trump’s administration after I Won’t Back Down was played at the US president’s rally in Tulsa on Saturday.

Petty’s family have stressed the song, which originally appeared on Petty’s 1989 solo album Full Moon Fever, was played without permission and they have moved to distance themselves from Trump’s presidential campaign.

In a statement, the Petty family say: “Tom Petty’s song I Won’t Back Down was used at Donald Trump’s campaign rally in Tulsa, Oklahoma.

“Trump was in no way authorised to use this song to further a campaign that leaves too many Americans and common sense behind.

“Both the late Tom Petty and his family firmly stand against racism and discrimination of any kind. Tom Petty would never want a song of his used for a campaign of hate. He liked to bring people together.

“Tom wrote this song for the underdog, for the common man and for everyone. We want to make it clear that we believe everyone is free to vote as they like, think as they like, but the Petty family doesn’t stand for this.

“We believe in America and we believe in democracy, but Donald Trump is not representing the noble ideals of either. We would hate for fans that are marginalised by this administration to think we were complicit in this usage.

“Concurrently, we have issued an official cease and desist notice to the Trump  campaign.”

This is not the first time that artists or estates representing a musician have lambasted the Trump administration for using songs without permission.

Last year, Ozzy and Sharon Osbourne blasted Trump for using Crazy Train in a video, while Prince’s estate took offence at Purple Rain being played at a rally in Minnesota.

In November 2018, Axl Rose hit out at Trump’s campaign team for using Guns N’ Roses material during the midterm elections and also in 2018, lawyers representing Aerosmith’s Steven Tyler send a cease and desist letter to the White House to insist that they stop playing Livin’ On The Edge.

The Rolling Stones, the estate of George Harrison and Queen have also all objected to their music being associated with Trump.