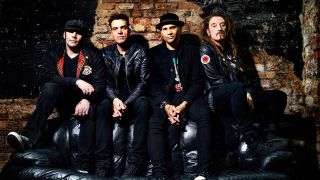 The Wildhearts' Renaissance Men has been chosen as the best album of 2019 by Classic Rock staff and writers, beating out stiff competition from The Darkness, The Who, Rival Sons and Bruce Springsteen.

Classic Rock's 50 Best Albums of 2019 are featured in our end of year issue, out now.

Renaissance Men was released in May, with our review saying, "the whole album takes you back to the feeling you had the first time you heard Turning American; that impossible Beatles/Metallica, angry/funny nexus. It’s the Wildhearts remembering what they do best – and just going for it."

"We're honestly blown away," says Ginger. "Not just because we made a good album, but that it has been so well received.

"Getting the four of us into a studio didn't guarantee great results, or even any results, but once we heard the finished album we knew that we liked it, at least.

"Jim Pinder has done us proud with the production. He knows our material, so he understood what the fans would want to hear. I'm really proud to have worked with him, mainly because he's going to be too expensive to work with again. This lad will be the next Bob Rock."

He continues, "What can I say? We make a good noise. There's no Motorhead or Slayer any more. Maybe the world really needs us now?“

Classic Rock editor Siân Llewellyn adds, "Renaissance Men is just one of those albums. An absolute belter from start to finish, made even sweeter by the fact that we never really expected it to see the light of day.

"I mean, a brand new album from the classic Wildhearts line-up of Ginger, CJ, Ritch Battersby and Danny McCormack in 2019? Yeah, like that'd ever happen… And even if it did, what were the chances that it'd be all killer and no filler?

"But it did happen, and in such definitive, declarative Wildhearts style. It's triumphant. Galvanising. Thrumming with melody and energy and attitude and intent. With songs that burrow into your brain and stay there. It's the sort of rare album that comes along once in a blue moon and restores your faith in bands, in people getting their shit together, and, ultimately, in this rock'n'roll lark that we love.

"It romped to Classic Rock's top spot with ease. And it deserves it. The only snag? The Wildhearts have only gone and set themselves one hell of a task to follow it up..."

Classic Rock's 50 Best Albums of 2019 are featured in our end of year issue, out now.