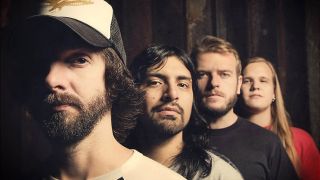 JD Cronise says when he first saw artist Jetter Green’s work, he knew instantly that he had to commission him to design the cover for latest album High Country.

Their fifth album and follow-up to 2012’s Apocryphon was released last week via Razor & Tie.

The singer and guitarist tells Rabid Noise: “The cover is always really important. I always try and find an artist whose work I really admire to do it.

“I just happened across Green’s artwork in a store and immediately I thought, “Wow, that would look great on an album cover.’”

Cronise says even in the days when digital music dominates, he thinks it’s still important to make the cover artwork as striking as possible.

He adds: “The idea of there being this piece of artwork associated with a piece of music – it’s something that resonates with me and I really like to have that. A good album cover always compliments a good record.”

The Sword have issued streams of Mist & Shadow and Dreamthieves. They’re currently on tour across Europe and return to the UK next month.