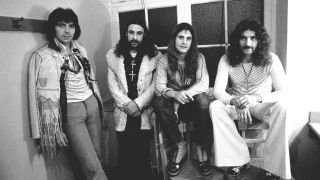 The Recording Academy has revealed the names of the artists who will be given a Lifetime Achievement Grammy Award in 2019.

And among the names revealed today are Black Sabbath, who will be honoured at a ceremony in Los Angeles on May 11.

The annual award is given to artists who have "made outstanding contributions of artistic significance to the field of recording.”

Lou Adler, Ashford And Simpson, and Johnny Mandel have been named Trustees Award honourees, while Saul Walker will be the Technical Grammy Award recipient.

“This year, we have a gifted and brilliant group of honourees and their exceptional accomplishments, contributions, and artistry will continue to influence and inspire generations to come.”

The Recording Academy praise Black Sabbath for inventing “the heavy metal signposts" that "influenced every heavy rock band that followed.”

Sabbath wrapped up their last-ever tour in their home town of Birmingham in February last year, with both Ozzy Osbourne and Tony Iommi later saying that it might be possible for them to get back together to play at the 2022 Commonwealth Games in Birmingham.