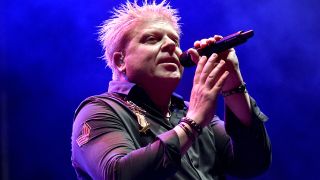 The Offspring have announced that they’ll play a virtual gig inside Wargaming’s Massive Multiplayer Online game World Of Tanks.

The performance is set to take place on September 18, with Dexter Holland, Noodles, Pete Parada and Todd Morse making the announcement on social media.

The Offspring say: “We're excited to announce that World Of Tanks has invited us to perform inside their game. Beginning September 18, you can join us on a virtual stage right in World Of Tanks.

“The game has never seen anything like this before, so we're excited to be the first!”

World Of Tanks is available to play on PC, Mac, PlayStation4, Xbox One, iOS and Android.

The virtual show follows a similar event held last month, which saw Korn perform inside AdventureQuest 3D and AdventureQuest Worlds, where fans got the chance to hear a new track prior to the release of The Nothing.

Following their virtual performance, The Offspring will head back out on the road for shows in the US, South America and Canada.

They’ll return to Europe next summer for sets at Rock im Park and Rock am Ring.