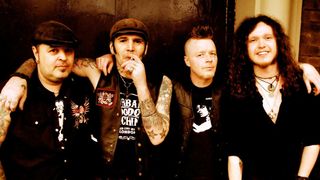 The Main Grains have released a video for We’re Happy Round Here. The band is the latest project from former Wildhearts and Yo-Yos bassist Danny McCormack, and also features John JJ Watt on rhythm guitar, Ben Marsden on lead guitar, and Ginna Rhodes on drums.

We’re Happy Round Here. is taken from the Don’t Believe Everything You Think mini-album — available now on TSB Records — and follows the release of their debut video Unscrewed, which came out last November. “It’s a song about how blind people are in the face of adversity,” say the band. “It evokes an honest, dirty, Punk ‘n’ Roll vibe that incorporates everything about The Main Grains”.

The video for the song was filmed during this year’s Camden Rocks Festival in London, and was filmed and edited by UK Director/Actor Mark Haldor, who has previously produced music videos for Ginger Wildheart and Hey! Hello!. Mark is currently finishing editing on his directorial debut feature film Crossing Over, a comedy he co-wrote and also stars in.

Don’t Believe Everything You Think is available now, and the band play some shows with the Ginger Wildheart band next month (dates below).