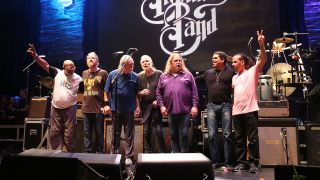 The surviving members of the last Allman Brothers Band lineup will reunite for a show at Madison Square Garden in New York later this year.

Billed as The Brothers: Celebrating 50 Years Of The Music Of The Allman Brothers Band, the concert has been lined up in the Big Apple for March 10 and will see guitarists Warren Haynes and Derek Trucks, drummer Jaimoe Johanson, bassist Oteil Burbridge and percussionist Marc Quinones take to the stage for a night of Allmans music and jams.

The special performance comes after the band took their final bow following a show at New York’s Beacon Theatre on October 28, 2014, and three years after the death of Gregg Allman.

Trucks says in a statement: “From the Fillmore East to the Beacon, New York City has always been a spiritual home for the Allman Brothers. So it only feels natural to honour uncle Butch, Gregg, Berry, Duane and all the other brothers and sisters we have lost along the way here at MSG.

“I’m excited to get to play these songs with Jaimoe and the Brothers one last time to celebrate 50 years of this music.”

Haynes adds: “Hard to believe it’s been five years since our final show at the Beacon. We had all talked about doing a final show at Madison Square Garden which never came to fruition. What a great way to honour 50 years of music and fulfil that wish at the same time.”

The lineup on the night will be further bolstered by Duane Trucks and Reese Wynans, while pianist Chuck Leavell is listed as a special guest.

Tickets for the show will go on sale from January 10 through Ticketmaster, with a portion of the proceeds benefitting The Big House in Macon, Georgia, which was the band's home from 1970 to 1973 and now serves as their official museum.