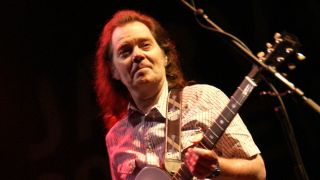 The 13th Floor Elevators have confirmed they are to play their first show for 45 years at a festival in their hometown of Austin, Texas.

The psychedelic rock pioneers formed in Austin in 1965 and called it a day five years later after releasing three albums.

Frontman Roky Erickson is joined by original drummer John Ike Walton and bassist Ronnie Leatherman in the reunion lineup. Electric Jug player Tommy Hall is also onboard for the show at the Levitation festival, May 8-10, at Carson Creek Ranch.

Hall, 72, tells the Austin Chronicle: “You try to find out what the different structural levels of the universe are so you go on this trip to understand that.

“Eventually, you realise that you have to go back to the beginning and figure out what caused it all. So that’s why this has taken so long. For a long time, it was because I wasn’t in a stable environment. I had to be able to support myself. Finally I got settled and I can look at the beginning again.”

Hall adds that he expects the younger audience to get behind the band, saying: “When we we’re going on we weren’t very appreciated, but now the young people dig us. With the younger generation’s knowledge and their use of weed for good purposes, they understand the information. Once we have these ideas, it should change us physically.

“As we get the ideas, our perception increases. That’s part of the thing of the Elevators. That we’ll live forever. Once we understand the way the universe works, our minds will be ahead of our bodies and that should be the result.”