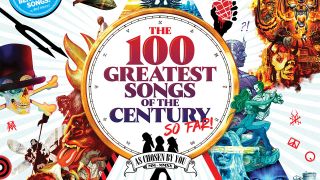 People who trot out the old "rock is dead" trope are supremely tiring, but if there's one thing we learned putting together the new issue of Classic Rock together, it's not simply that they're dull, but that they're wrong. So very wrong.

Working on this issue was affirmation that the best music made since this Millennium hoved into view is as thrilling, as vivid, and as reassuringly joyous as anything thrown up in by previous eras.

A few months ago we asked our readers to help compile the 100 greatest songs of the 21st century, then watched as a blank canvas was filled with songs that thrill the heart and move the feet. Don't believe us? The Spotify playlist is superb.

Elsewhere in the new issue of Classic Rock, we look back at the extraordinary life of the great Little Richard, bring you interviews with Mick Box, Glenn Hughes and Ashley McBride, look back at Humble Pie's recording legacy, and – in the absence of live gigs – expand our reviews section with frontline reports from some of rock's most historic shows.

Classic Rock 277 is on sale now, and available to buy online.

The 100 Greatest Songs Of The Century (So Far)
From superstars, veterans and newcomers alike, the past 20 years have seen the release of plenty of great songs. Some of the artists in out list – voted for by you – are no more or retired, but many more are still going strong. From the list, we take an extended look at some of them, including…

Marillion
Inside the band’s latter-day masterpiece, from a standout album, the standout cut that made our Top 100.

Thunder
Guitarist Luke Morley takes us through a track from the band’s renaissance record.

Ghost
How mainman Tobias Forge built a world around a myth, and reaped a gleeful “pure eighties rock-club banger”.

Andrew W.K.
Its release in the aftermath of 9/11 seemed incongruous, but his brilliant upbeat party anthem lifted spirits.

Black Sabbath
If you’re going to end it, then end it on a high. Inside the metal legends’ crowning career-end masterpiece, in their own words.

Nickelback
The lyrics were born of an argument, and two missing beats cost them five grand, but the heartbreak and money that this song cost them proved worth it.

Halestorm
Plenty of punters snapped up their records, swiftly catapulting the band into the big time. But which of their songs was catapulted into out Top 100?

Green Day
One of the great ‘resurrection’ tracks brought old fans back on board and pulled in millions of new ones.

Iron Maiden
“It’s kind of bittersweet and extremely loving, and at the same time very emotional,” said Bruce Dickinson. But which of the metal giants’ songs is he talking about?

Audioslave
Black Sabbath’s Tony Iommi chose a riff from one of their songs as a favourite of the post-millennium. And he knows a thing or two about riffs!

Rush
Its parent album changed a lot of people’s minds about not liking Rush, as did this song in particular.

Foo Fighters
Even the best songwriters can get it wrong. As with a song Dave Grohl wrote, which they recorded then shelved because “we didn’t think it was any good”.

AC/DC
It’s hard to single out one great song from a band who have so many classics. Thankfully this one picks itself.

The Number 1!
Some songs seem to be so unique that they occupy their own space, outside of time and place. The song that you voted the best of the century (so far) is one of them.

Little Richard
We look back at the flamboyant self-acclaimed “architect of rock’n’roll”, who even Elvis conceded was “the greatest”.

The Stories Behind The Songs: Mungo Jerry
A song that the band didn’t see as having potential as a single, In The Summertime became a worldwide hit that soundtracked the summer of 1970.

Q&A: Mick Box
The Uriah Heep founder on domestic duties, dog woes, ’appiness and half a century of staying ’umble.

Six Things You Need To Know About… Ashley McBryde
The ‘kindness first, but take no crap’ country rocker might be shy, but you’d best not piss her off – especially if there’s a shovel around.

Buyer’s Guide: Humble Pie
Never able to capture on record the punch and power of their live shows, their catalogue nevertheless includes some real gems.

Gig Listings
Who’s playing where and when (although expect further cancellations), including a separate list of rescheduled gigs.

The Soundtrack Of My Life: Glenn Hughes
The Voice Of Rock on the records, artists and gigs that are of lasting significance to him.

How to buy Classic Rock

* Copies of the new issue of Classic Rock can be purchased online from MyFavouriteMagazines.

* Classic Rock is on sale in the UK in shops as they reopen such as supermarkets and newsagents, although delays are possible as stores prioritise the delivery of different lines of stock.

* An easy option is to go digital. You can subscribe digitally from just £2.19 an issue. Individual issues and subscriptions are also from the Apple Store, Zinio, Readly, Press Reader and Pocketmags.

* Save money by buying a physical subscription. UK subscriptions are available - you can also subscribe below.

* The postal service is working, although delays are possible.