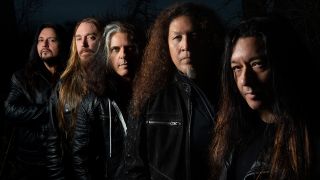 Testament have released their brand new single titled Children Of The Next Level.

It’s the latest track from the thrash veterans’ upcoming studio album Titans Of Creation, which will launch via Nuclear Blast Records on April 3.

Testament previously shared the track Night Of The Witch.

Frontman Chuck Billy says: "To all our Testament Legions out there... we hope you have been playing the shit out of our first single Night Of The Witch and are ready for our second release Children Of The Next Level.

"I know we are ready to play it live, so March 6 we are going to debut it for our fans attending the show at the O2 Academy in London. We are going to ask them to pull out there cameras and put up videos for everyone to enjoy and thrash it up!"

Testament are currently on the road across the UK with Exodus and Death Angel - part of The Bay Strikes Back European tour.

They were forced to pull the plug on their planned show at Milan’s Trezzo Live Club recently, after Italian authorities cancelled all public events in the area as a precautionary measure against the spread of coronavirus, which has disrupted a number of artists’ touring schedules.

Testament: Titans Of Creation
Testament will release their 13th studio album Titans Of Creation in April. The follow-up to 2016's Brotherhood Of The Snake features the lead singles Night Of The Witch and Children Of The Next Level.View Deal