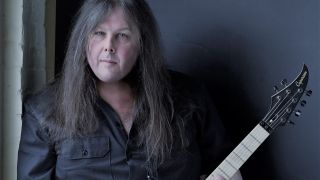 The record is titled War Of The Worlds Pt. 1 and it’ll launch on July 27 via Music Theories Recordings/Mascot Label Group.

Romeo recorded the bulk of the record over an 18-month period at his home studio with vocalist Rick Castellano, bassist John “JD” DeServio and drummer John Macaluso.

War Of The Worlds Pt. 1 is said to pay homage to “film score giants Bernard Hermann and John Williams” and will also features EDM/dubstep elements.

Romeo explains: “It’s me putting all the things I love about music in a blender. Somebody might listen to it and say, ‘What is this guy thinking?’ But it's all about being creative and having a good time with it.

“My fans might think I’ve lost my mind on this one!”

Romeo and bassist DeServio went to the same high school, with the guitarist revealing that they had always wanted to record together.

Romeo adds: “This was the perfect opportunity. The planets finally aligned, and we were able to work together. It was great to have him play on it.”

The guitarist says that part two of the album is “already finished” and adds: “It just needs a few vocals, a couple of solos and a few tweaks here and there.

“I want people to absorb the first one for a while, and then we’ll put out the second record. They’ll complement each other, but they’ll also be a bit different.”

To mark the album announcement, Romeo has launched a lyric video for Black which can be found below.