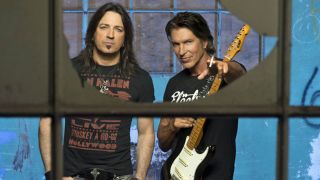 Sweet Lynch have released a lyric video for their track September.

The song is a tribute to the victims of the 9⁄11 terror attacks on America and is set to feature on the supergroup’s debut album, due out through Frontiers Records in 2015.

Sweet previously described the album as “an incredible combination of classic 70s and 80s” rock.