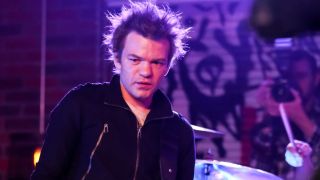 Deryck Whibley says his recovery following last year’s near-death experience due to alcohol abuse is going well - but it’s not complete yet.

The Sum 41 frontman was hospitalised after his liver and kidneys collapsed due to years of drinking. He was put into an induced coma and later warned that even one more drink could kill him.

Whibley, 35, tells Noisey: “I still have trouble with my walking, because being in the hospital for that long, everything just depleted. I couldn’t walk for the longest time, and I’m still re-training myself to walk normally. The doctors say it’s been going quickly, but it feels pretty slow to me.

“I am dying to get onstage. That’s the only thing that’s been keeping me going – music is really the only focus I’ve had since being in the hospital.”

And he knows he had a very fortunate escape from more serious damage. “My liver is fine,” he reports. “Everything shut down before any more damage could happen. To walk out of there alive, without cirrhosis or needing transplants – it could have been worse.”

Sum 41 are recording tracks for their sixth album, and planning a tour for later in the year. Whibley admits: “It’s a lot of stress – it’s a tough lifestyle. It’s hard to go at that pace without using something to cope

” I drank to wake me up and get that fake energy. There were a lot of times I didn’t even want to drink, but I was so tired that shots of Jack were all I could do to get onstage.”

And he vows: “I don’t even want to drink again. I’m done with it. I’ve definitely had enough.”