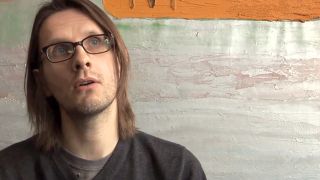 Steven Wilson has shouted down a rumour that Porcupine Tree are planning to record their 11th album.

The band went their separate ways after The Incident was released in 2009, and Wilson has been concentrating on his solo career ever since. Three years ago he said: “I don’t have time in my life to do that and do what I’m doing now.”

Now he tells FaceCulture: “One of the funny things about the internet is how quickly a lie can become a rumour can become a fact.

“It was just some guy who went on a website – I’ve never met him, he pretended he knew me – and he said something like ‘Steven Wilson said the next project he’s going to do is a Porcupine Tree album.’

“He made it up. I’ve never met him. It became a rumour and before you know it people are saying to me, ‘I hear you’re doing this next.’ No!”

But while Wilson is fully focused on his album Hand. Cannot. Erase. which is launched on March 2, he’s not ruling out an eventual return to Porcupine Tree.

He says: “I suspect that if I did do it, it would have to be more like a side-project to what I do now. Why would I want to go back to a band now?

“But at the same time, Porcupine Tree has a special place in my heart and my career. I think probably we will make another record. Whether it will be the last, I don’t know.

“But right now I can say I have no plans to go back to the band.”

Wilson tours the UK with his solo band in March: