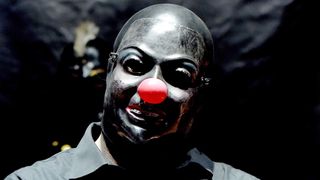 Slipknot frontman Corey Taylor has confirmed he was joking when he said bandmate Shawn ‘Clown’ Crahan had changed his stage name as a result of the current “killer clown” craze.

The phenomenon began in the US earlier this year, when police forces in several states investigated sightings of people in clown dress behaving suspiciously.

At least seven people have been arrested and charged with making terrorist threats – although further arrests have taken place as a result of fake reports being made to the authorities. Copycat incidents have been recorded elsewhere in the world.

Taylor told BBC2 topical comedy show No Such Thing As The News: “The effects have been such that even our dear Clown has downgraded himself to ‘Mime’ in order to distance himself from these hedonistic doppelgangers until the coast is clear.”

he added: “Remember, a real clown doesn’t need a knife to intimidate – just a bat and a good cold stare.”

But after some news outlets reported his comment as being serious, Taylor has published a denial via Twitter, saying: “Guys, no, Clown did not change his name. That was a fake statement that I wrote for humour’s sake.”

No Such Thing As The News co-creator Dan Schreiber reacted to the “joke statement” being reported as fact by saying: “This is fantastic.”

The show is a spin-off from the BBC’s QI, which returns on October 21, with Taylor appearing as a guest during the new series, and Sandi Toksvig taking over from original presenter Stephen Fry.

Slipknot complete their touring duties in support of 2014 album .5: The Gray Chapter in November.