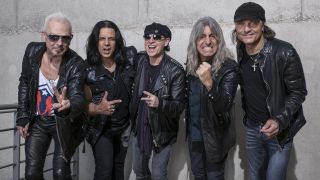 Scorpions are to release their own brand of whisky, it’s been announced.

The rock icons have joined forces with acclaimed Swedish distillery Mackmyra from the Rock’N’Roll single malt – the same distillery Motorhead teamed up with back in 2015.

The non-age statement whisky has been aged in both ex bourbon and oloroso sherry casks and then finished in sweet cherry wine casks from Germany.

And given that former Motorhead drummer Mikkey Dee is now a permanent member of the German rock giants and was also born in Sweden, the partnership makes perfect sense.

Scorpions say: “Finally, we have our own Scorpions whisky ready to be released. We love it! This particular whisky gets to its perfect maturity in extraordinary German sweet cherry wine casks.

“We hope you all enjoy it. Let’s rock the night and taste the sting!”

“I think we managed to get a smooth whisky with a lovely aroma of fruity vanillas from the bourbon casks, soft buttery tones from the oloroso sherry casks as well as a sweeter touch from the cherry casks.

“The fact that we got a finish of both cherry and sherry gave the whisky a perfect balance.”

Scorpions single malt is bottled at 40% and will be available through the official Mackmyra website.

Metallica issued a statement to say they were “stunned and in disbelief” at the loss of their friend, adding that they considered him to be a member of the band.

Find out more about the wide range of wines, whiskies and beers from your favourite bands by visiting our gift ideas page.