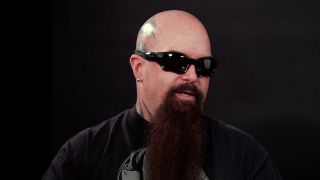 Kerry King has compared asking Gary Holt to join Slayer to inviting a girl to a school prom – and says the conversation was held before it was known that the band would need him.

Exodus guitarist Holt began standing in for Jeff Hanneman in 2011 after the Slayer co-founder fell ill, and he’s remained with them following Hanneman’s death in 2013.

King tells Talk Is Jericho: “I already had Gary in my back pocket for any future thing. I called Gary in early 2010 and said, ‘If I ever do anything, would you be into doing it?’ He’s like, ‘Man, I was hoping you’d hit me up.’

“We kept it in our back pocket. There was no music – there was nothing.”

King returned to the idea the next year. “The Jeff thing went down and I called Gary again,” he says. “These are hard conversations, because even though Gary’s my friend, I don’t know…

“It’s like asking a girl out to the prom, kind of. If you get turned down, you’re like, ‘Oh man, we suck. Fuck!’ I said, ‘Hey dude, we’re going to Australia and Jeff’s not going. Would you like to be in Slayer?’

“He said, ‘Absolutely,’ and we’ve been going ever since.”

Hanneman later voiced his approval for Holt’s work. King recalls: “After the fact, Jeff and Gary took pictures and Jeff’s like, ‘Man, it couldn’t be a better pick.’”

King recently told how he had to tell Hanneman that he wasn’t fit enough to return to Slayer, describing the conversation as “the hardest thing I ever had to say.” The band launched 11th album Repentless earlier this month, and return to the UK in November with Anthrax.