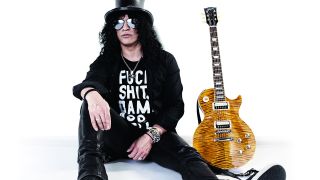 Slash says that while he enjoyed watching the Motley Crue biopic The Dirt, he can’t see a similar film about Guns N’ Roses being made.

The guitarist was speaking with Futuro 88.9FM when he made the comments, but also says that the material recorded in the early 90s could make for an “interesting release.”

Speaking about The Dirt, Slash says: “I saw it, I liked it, I think it's great. It took me back to the days of the 80s – I remember everything. This gave me more details that I didn’t know.

“I wouldn’t like a Guns N’ Roses movie like that – I can’t imagine trying to find someone to personify the members of the band! I don’t see it being possible.

“But what there is is a lot of recorded material from the tours of the early 90s, which can be edited and make an interesting release with that. We’ll see what can happen.”

Guns N’ Roses were recently confirmed for the Louder Than Life festival in Louisville, Kentucky, on September 27-29 – and Slash says that other shows could follow later in the year.

He says: “With Guns N’ Roses, we have a little tour between September and October. There’s been a lot of talk about an eventual new album with Guns N’ Roses, but in reality we haven't done anything, so we can focus more on that there.

“What happens with the Conspirators will also depend on that – anyway we are already gathering material for an upcoming album.”

Will Guns N’ Roses have new material out by the time the live shows come around?

You never know, especially after comments by bassist Duff McKagan on Eddie Trunk’s Sirius XM show back in February. When asked if material was definitely in the works, as previously mentioned by both Richard Fortus and Slash, Duff responded: “Oh, it's real.”