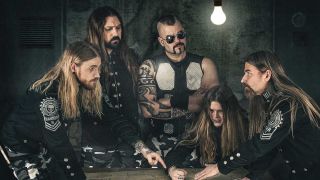 Sabaton have been injured in a car crash while on location in Tunisia.

The band were returning from a video shoot in the Sahara desert when the incident occurred, with the Swedish outfit forced to cancel their planned show in Gdansk, Poland, over the weekend as a result.

Sabaton say in a statement on Facebook: “We are all broken, badly beaten, bleeding and stitched up, but happy to be alive and confident that we will be fully recovered over time.

“However, after consulting medical expertise and evaluating all our injuries we are sure that we cannot do the scheduled concert in Poland without risk of consequential injuries.

“We will be back with full force in October for the North American tour and will return to Gdansk as soon as possible.

"Until then we would like to share a few of our private images from the filming in the Sahara and the accident.”

Sabaton’s next show will take place at Fort Lauderdale’s Revolution Live on October 4, with the band set to return to Europe with Apocalyptica and Amaranthe in early 2020 in support of their latest album The Great War.

Sabaton: The Great War
Sabaton have released their new studio album The Great War. The band began recording the follow-up to 2016's The Last Stand exactly 100 years after the end of World War One.View Deal