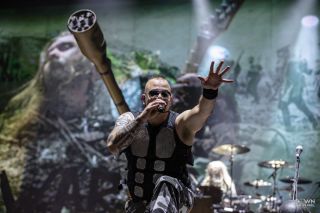 There has been so much debate and attention aimed at Parkway Drive headlining Bloodstock this year that it’s easy to forget there’s another band making a bold step up into headliner status at the festival in 2019.

While Parkway have made their ambitions nakedly clear in recent years by writing more arena-friendly hooks and beefing up their stage show to retina-burning levels, Sabaton have taken a slightly different approach: more songs about tanks and shit.

Alright, there’s a lot more to their war-centric power metal shenanigans than that, but the fact is that slowly but surely, album by battle-ready album, the Swedes have leapfrogged dozens of other pretenders to become one of Europe’s biggest modern metal bands.

So, how do they fare at their biggest ever U.K. gig? Well, the show is certainly big enough to merit their billing: looking something like Iron Maiden’s set up on the A Matter Of Life And Death tour, the stage is transformed into the frontlines of war, all barbed wire and sandbags and bursts of fire and bomb-effect pyro.

There’s a screen covered in war movie-esque visuals and even a big, fuck-off tank up there. If nothing else, Sabaton know how make the most out of their gimmick.

They also draw a big crowd, almost filling the entire field, and while you’d be hard-pressed to argue that everyone here is a diehard Sabaton fanatic, you’d be harder pressed to find someone without a big, shit-eating grin on their face. This is heavy metal at its most jubilantly silly, and that’s all it needs to be.

Song-wise, Sabaton have never been the most dynamic band going - though the thumping Ghost Division and power-metal-goes-trance chaos of 82nd All The Way are big highlights - but it doesn’t seem to matter tonight.

People are here for a big, fun, cheesy metal gig, and that’s exactly what they get. “Tonight we’re gonna play some new shit, some old shit...and some songs that are just shit,” bellows frontman Joakim, a one-man masterclass in self-deprecating humour and likeable silliness.

He’s probably as surprised to see his band up here as many of us are, but this is a moment Sabaton have earned, and it’s not something they’re taking for granted for a single second. You can’t help but pull for them in moments like these. After all: isn’t that what heavy metal is all about?