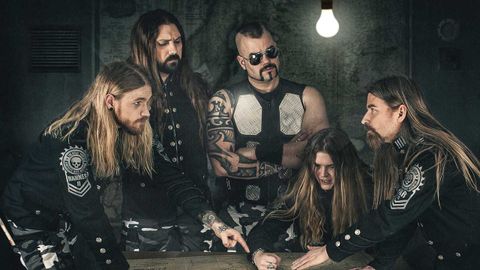 While society whines about our current political disarray that’s slowly eroding our personal sense of freedom, it’s easy to forget that a century ago the world had just witnessed one of the bloodiest wars in history that saw millions needlessly sacrificed and dynasties wiped out.

The Great War, even now, remains a harrowing record of slaughter, carnage and destruction that would have the most hardened Cannibal Corpse fan reaching for a cup of tea and a sit-down, but it takes a band with unrivalled historical knowledge to tell its story beyond the gore. If you don’t know it by now, that band is Sabaton.

Depending on where you sit, these Swedish power metallers are either an obsessive novelty band who get dorks dancing to songs about D-Day or the greatest history teacher you never had.

But regardless of what you think about the khaki-loving military maniacs, there’s no denying that Sabaton are both hugely knowledgeable in the subject of war and, if 2016 track The Last Battalion’s whopping 29 million video views are anything to go by, astoundingly popular.

Such is the grandiose and erudite quality of their output as we venture into their ninth album, the question isn’t whether they can make a credible concept record about one of history’s greatest tales, but if they can give us something new and exciting to latch onto. The answer is yes.

The Great War is, as usual, a rip-roaring, riff-addled march towards victory, coaxing influences from folk and power metal that sounds remarkably upbeat for an account of bloodthirsty mass destruction. But now, nearly two decades on from their very beginnings, Sabaton are looking like an even stronger prospect for 2019.

Opener The Future Of Warfare is a solid slab of deep-chested scene-setting with a bullet-splattered percussive backbone and immediate, fiery riffs that lay a foundation for this record.

But once The Great War passes the halfway mark it chucks in a suckerpunch on the title track in a swirl of epic classical music, underpinning Joakim Brodén’s account of the Battle Of Passchendaele with a bombast that has rarely been heard at this level with Sabaton.

Three tracks later and The End Of The War To End All Wars pulls an even bigger stunt as tides of choirs summon the catastrophic end of times normally attributed to the foreboding thrill of black metal.

It may not be a shock to hear that The Great War also has a few crowd-pleasers. The Attack Of The Dead Men, for all its grim storytelling, is the most joyful song you will ever hear about chemical weapons, thanks to Sabaton’s knack for lacing their power metal stride with disco-style grooves, while The Red Baron explores other throwback territories with 70s-inspired hard rock.

But to really get the most out of this album it’s worth checking out the ‘History Version’, which contextualises their sonic imaginations of Lawrence Of Arabia, the US marines and the German Air Force via bitesize narrative snippets.

With The Great War, recorded exactly 100 years after the events it honours, Sabaton have once more fortified their status as world-class power metallers, not only pushing their sound to new heights but solidifying their adeptness to tell stories and capture imaginations.