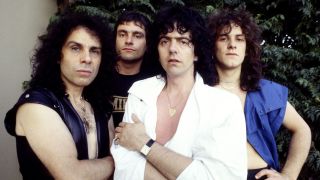 Dio, Appice, Bain and Campbell at the start of their career (Image credit: Getty)

He believes the iconic vocalist, who died in 2010, had no clear direction for the band when he formed it in 1982 – and he’d expected to remain with Black Sabbath instead.

But arguments over the Live Evil album led to Dio and Appice quitting Tony Iommi’s band – and a change of direction for the singer’s solo project.

Appice tells the Silk And Steel Power Hour: “Ronnie had a solo deal while he was in Black Sabbath. His first plan was to stay with Black Sabbath and do a solo record with all his friends on it.

“He wanted me to play on it, Cozy Powell, all his friends in different bands. It would be like an all-star album.

“Then things soured up with Sabbath. Things got a little bit funky, and he decided, that’s it, he’s leaving. Then it became, he’s going to use that record deal to launch a new career.

“That’s when he asked me if I wanted to join, and I said yes.”

Dio already had rough ideas for material that would appear on the band’s first album, Holy Diver – but there was no musical direction in place until guitarist Vivian Campbell and bassist Jimmy Bain joined in.

Appice says: “We auditioned Vivian and Jimmy at the same time, and it just gelled. We just went, ‘Damn - this feels good. This sound great.’”

Asked if Dio had been prepared for the solo career that was to follow, the drummer replies: “To tell you the truth, I don’t think… He might have had a vision of what he wanted.

“But It never was planned out, what the band should sound like. The band created its own sound.”

Appice, Campbell and Bain regrouped as Last In Line in 2012 and released debut album Heavy Crown earlier this year, following the death of Bain in January.