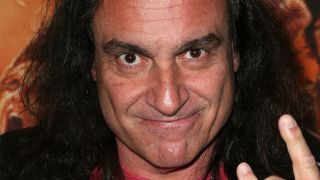 Veteran drummer Vinny Appice has recalled playing with Ronnie James Dio and John Lennon on their last ever shows.

He’s revealed that when Dio brought him into Black Sabbath for 1981’s Mob Rules, the first track he played was Sabbath’s Neon Knights – which was also the last song he played live with the iconic singer before his death in 2010.

Appice tells The Classic Metal Show: “Before I met Black Sabbath I met Tony Iommi the night before. The next day I went down to the rehearsal studio and I met Ronnie, Geezer Butler, Geoff Nicholls on keyboards and Tony again.

He only recently discovered that he was also behind the kit for Lennon’s last-ever performance, shortly before his murder in 1980.

Appice says: “We did the show at the Hilton and it was a live worldwide telecast. That was his last appearance ever – and I fucking played on it. I didn’t know that until a magazine called _Guitar Aficionado _came out last year.”

He and drummer brother Carmine are currently on the road in the US with their Drum Wars Live show. An album based on the performance is out now featuring Dio’s Holy Diver and Ozzy Osbourne’s Crazy Train.

Vinny is also currently working with Dio offshoot Last In Line, who are expected to release their album in the coming months after inking a deal with Frontiers Records last year.