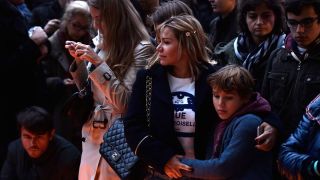 The world of rock has come together to show solidarity with the people of France following Friday night’s terrorist attacks in Paris.

An Eagles Of Death Metal gig at the Bataclan was at the centre of the attacks, with around 80 people believed to have been gunned down at the venue. In total, 127 people lost their lives in a series of coordinated shootings and suicide bombings last night, with extremist group IS claiming responsibility.

More than 300 people are injured, 30 of them in critical condition. Paris is in lockdown as the military hunts for accomplices to the eight attackers already accounted for.

EODM made a statement in the wake of the Bataclan massacre, saying that they were still trying confirm that the band and crew were all safe. Universal Records later said the band all made it out alive.

Today, musicians from across the rock spectrum have told of their shock at the news and offered their sympathies to those affected.

Dave Grohl’s Foo Fighters were due to perform in Paris on Sunday night (November 15), but have cancelled all four of their remaining European dates. They say: “It is with profound sadness and heartfelt concern for everyone in Paris that we have been forced to announce the cancellation of the rest of our tour.

“In light of this senseless violence, the closing of borders, and international mourning, we can’t continue right now. There is no other way to say it. This is crazy and it sucks. Our thoughts and prayers are with everyone who was hurt or who lost a loved one.”

U2 were also set to play in Paris this weekend, with their two shows also being pulled.

Papa Roach, set to play in the city on Sunday night, say: “The Papa Roach crew is OK and safe. We were three hours away from crossing the border into France when we found out the news of the terrorist attacks. Much love to our friends in Eagles Of Death Metal. To the fans and the families of the fans, the victims at the stadium, our hearts and prayers go out to you.”

Members of Slipknot, Metallica, Motley Crue, Guns N’ Roses, Opeth and many more have also told of their horror and offered their sympathies to the people of France.