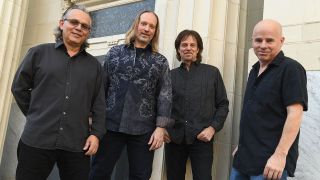 Robert Berry is finally out on the road in the US on a tour he describes as "a dream come true". The multi-instrumentalist, best known for his involvement with the band 3 with Keith Emerson and Carl Palmer, with whom he released The Power Of Three in 1988, has formed a band featuring former Spock's Beard drummer Jimmy Keegan, Circuline keyboard player Andrew Coyler and guitarist Paul Keller (Emerson/Palmer). The tour will see Berry and band headline this year's Progstock Festival in New Jersey.

"Historical, musical, and technically demanding,' Berry tells Prog. "For me, this tour is a dream come true.  For the fans of progressive rock, I have assembled a band of true professionals, who will not only guarantee a top notch performance, but also an amazing energy and love for the music."

Berry released his own 3.2 - The Rules Have Changed album last year, featuring material he'd been writing with the late Keith Emerson prior to the keyboard player's death in 2016.

"I've been terribly excited, and a wee bit terrified, at touring Robert's 30-year history of progressive rock, ever since he called me last year to fill the position on keyboards and vocals," adds Colyer. "I'm honoured to be covering the greats of this genre, including Keith Emerson, Rick Wakeman, Tony Banks, John Evan, and Jordan Rudess.  Robert's "re-imagined" versions of some of these classic songs from his days on the Magna Carta label are really rocking, yet stay true to the originals.  We're also covering material from Robert's solo catalogue, the original 3 album from the 1980's, and last year's Billboard-charting 3.2 album.  This is definitely the hardest thing I've ever done, but after four shows under our belt, I think the fans are in for a real treat!"