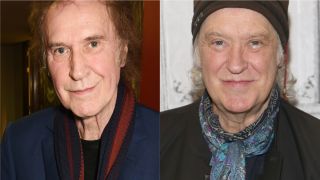 In June last year, Ray Davies hinted that a new Kinks album with his brother Dave and drummer Mick Avory could be on the cards.

In a video interview with Channel 4 at the time Ray said: “The trouble is, the two remaining members, my brother Dave and Mick never really got along very well. But I made that work in the studio – it fired me up to make them play harder and with fire.

"So if I can recapture those moments… I’ve got some great Kinks tunes in my head.”

And in a new interview with Rolling Stone, Dave has given further insight into what the pair have been up to recently.

He says: “The songs are really just in demo form now – but good demos. Ray is still dissecting various other material we might use. The intention is to get the work out, but it’s not a done deal.”

They’ve also been working on the 50th anniversary edition of their Arthur (Or The Decline And Fall Of The British Empire) album which is pencilled in for an October release.

Dave says: “That’s virtually done. It’s a really interesting package that’s going to have other songs from that time period like my solo track Hold My Hand.”

In bringing the package together, Dave reports they’ve stumbled across many other songs in their archive which have never been released but admits that some of it “needs a bit of work.”

Rolling Stone say that Ray has been adding touches to some of those older tracks while also working on new material, while Avory drums on a selection of songs, with the trio joined in the studio by bassist Bob Henrit.

As for a possible tour, Dave says: “It’s not out of the question. But at this stage, it’s far too early to say. It would be fun though, wouldn’t it?”

Speculation about a possible Kinks reunion was thought more likely in recent years after Ray made a guest appearance at Dave’s solo show in December 2015, performing the classic track You Really Got Me.

The pair had previously ended their two-decade feud by meeting and playing music together in 2014, which came after the death of original bassist Pete Quaife in 2010.

Jim Rodford who played bass with the band until 1996 died at the age of 76 last year.