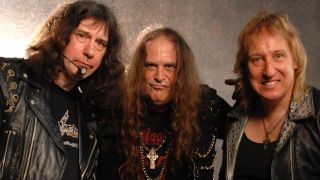 ExtermiNation will launch in the UK on April 27 thanks to a successful crowdfunding drive. They raised $27,000 to help with production costs and offered backers incentives including a full-length covers album titled Party Killers.

The new release is the band’s first original album since 2009’s Walk Through Fire and will be released on Digipak, 2LP gatefold green vinyl and as a digital download.

Speaking about the decision to launch a Kickstarter campaign, vocalist and bassist John Gallagher told MetalRules: “It seemed more obvious the longer we went into this that it was going to cost more than the budget we have.

“We have a good relationship with our record company, SPV, but this is gonna cost about twice as much as the last one due to the extra rehearsals.”

The band have issued a snippet of album track Thunder Down Under which is a tribute to late AC/DC frontman Bon Scott. Hear it below.