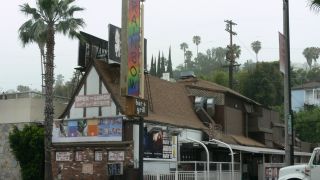 Mario Maglieri, the owner and founder of The Rainbow Bar And Grill and The Whisky A Go Go on the Sunset Strip, has died at the age of 93.

The news was confirmed on the famous rock venue’s Facebook page.

A statement reads: “Dear Rainbow friends and family, it is with great sadness to announce the passing of our beloved Mario Maglieri – owner and founder of The Rainbow Bar And Grill and The Whisky A Go Go. He passed while surrounded by loved ones.”

A memorial to the impresario, who helped launch and sustain the career of hundreds of artists including Motley Crue and Guns N’ Roses, will be held on May 28 at 1pm at the Rainbow, which he turned into one of the most famous venues in the rock world.

Maglieri was born in Seppino, Italy, in 1924 and moved to the US at the age of four. He ran successful restaurants and clubs in Chicago before moving to Los Angeles where he opened the Rainbow Bar and Grill in 1972 along with The Roxy Theater, and The Whisky A Go-Go.

Former Motley Crue bassist Nikki Sixx tells Variety: “All the way back to the late 70s, Mario would take time out to listen to my music and my dreams.

“He gave us a home to play out those dreams at the legendary Whisky A Go Go. Once, after Motley Crue sold out three nights at the Whisky, Mario said to me, ‘I think you got something here, kid.’

“He gave so many of us dreamers a real shot. Plus, the clam chowder at the Rainbow kept us all from wasting away and sometimes he would feed us for free if we were really hard up.”

The Rainbow was Motorhead icon Lemmy’s favourite haunt, with the venue honouring his memory with a life-size statue last year.

Maglieri is survived by his widow Scarlett, son Mikeal, and grandchildren Mikeal, Cheryl, and Gina.