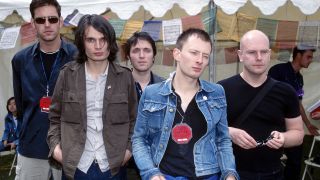 Radiohead have released an 18-track collection of demos recorded around the time they were piecing together their 1997 album OK Computer.

The files were recently stolen from Thom Yorke’s archive, with the band deciding to push out the material through Bandcamp after the thief demanded they pay $150,000 for their return.

Radiohead add: “Instead of complaining – much – or ignoring it, we’re releasing all 18 hours on Bandcamp in aid of Extinction Rebellion– just for the next 18 days. So for £18 you can find out if we should have paid that ransom.

“Never intended for public consumption – though some clips did reach the cassette in the OK Computer reissue – it’s only tangentially interesting. And very, very long. Not a phone download. Rainy out, isn’t it though?”

Earlier this year, Radiohead were inducted into the Rock And Roll Hall Of Fame by David Byrne.

Drummer Phil Selway and guitarist Ed O’Brien were the only members of the band to attend the ceremony, but took to the stage to acknowledge the accolade.

Selway said: “I’m beyond proud of what the five of us have achieved together, and I know that Radiohead wouldn’t have become what it is without the five of us.”