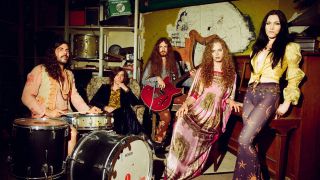 Purson have confirmed that they’ve split.

Rumours have been swirling for months over their future – but singer Rosalie Cunningham has now officially announced that Purson has “gone as far as it could go.”

She says in a statement: “The past five years have been an unforgettable whirlwind, for which I have to thank our wonderful fans around the world, the band and all the people who have contributed to Purson’s success over the years.

“Their support has been overwhelming, but the Purson framework has gone as far as it could go, and now it’s simply time to move on.

“I feel strongly drawn to a more DIY approach to my career in music, and look forward to the freedom to explore many avenues as a solo artist.”

To mark the end of the band, Purson have released one final track titled Chocolate Money featuring Comus’ Jon Seagroatt on saxophone and Vodun singer Chantelle Brown on backing vocals.

Cunningham adds: “Chocolate Money is a snapshot of the ostentatious decadence of the 70s. The mythical rock star character with his double-entendre and self-centred hedonism.

“The industry has become a very different world since then, which is something I will expand on lyrically with my next album. It has inspired my desire to go back to basics and remember what music is supposed to be about.”

Chocolate Money, which can be heard below, is a new recording and didn’t feature on Purson’s final album Desire’s Magic Theatre.

Why Purson are bringing back psychedelia