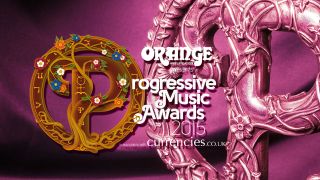 Prog Magazine is proud to announce its fourth annual Progressive Music Awards presented by Orange Amplification in association with currencies.co.uk

The 2015 awards will again take place at London’s Underglobe venue, beneath Shakepseare’s Globe Theatre, on Thursday September 3. This year, the event will be hosted of the first time by TV presenter Matthew Wright. You can vote for your choice of the nominees at: progmagazine.com/awards.

Jerry Ewing, Prog Magazine Editor says, “Prog Magazine is currently enjoying its most successful year ever in terms of sales (our current issue is 35% up year on year), and I believe we are starting to see this reflected in the way the genre is interacting with the mainstream and with the commercial successes the front runners of today’s progressive scene are also enjoying. And it’s been another bumper year for the genre and this is a wonderfully diverse spread of artists who find themselves worthy nominees this year, once again showing that the influence of progressive music now spreads far and wide throughout so many areas of music. And of course, the night itself is always such a memorable one. It’s going to be a lot of fun with Matthew hosting for us for the first year.”

Says host Matthew Wright, “I was made up to be asked. I attended in 2013 and met Steve Hillage for the first time. I spent a lot of time listening to his Green album and his stuff with Gong but I never thought I’d meet him. I also met Robert John Godfrey, who I’d seen live many times but had never met before. The experience was only marred by the fact I had to get up at 4am the next morning to do my show, so I think I might take the Friday off this time!”

The **Progressive Music Awards has established itself as one of the most respected events in the music calender. In its short but illustrious history, it has honoured and and hosted some of the world’s most renowned and respected artists including_ _Peter Gabriel, Rick Wakeman, Ian Anderson, Genesis**, and Rush. But this is about more than the old guard. Talent of tomorrow including Syd Arthur, TesseracT and Messenger have seen their careers go from strength-to-strength since picking up their award.

There are 13 categories, of which seven are reader-voted. These are:

Kate Bush – Before The Dawn Tour

The Enid Present: The Bridge

And So I Watch You From Afar

Christina Booth – The Light (from The Light)

Public Service Broadcasting – Gagarin (from The Race For Space)

Steve Hackett – Love Song To A Vampire (from Wolflight)

Vennart – Operate (from The Demon Joke)

Von Hertzen Brothers – Hold Me Up (from New Day Rising)

Anthony Phillips – _Harvest Of The Heart _

Hawkwind – _This Is Your Captain Speaking… _

Jethro Tull – _Minstrel In The Gallery _

Album of the Year

Band/Artist of the Year

Between The Buried & Me