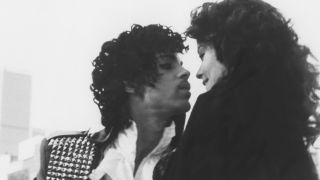 A blazer worn by Prince in the 1984 movie Purple Rain will go under the hammer next month.

The black and white jacket with leather sleeves is for sale at a guide price of $8000, but is expected to fetch a much higher figure when it goes up for auction at Profiles In History auction house in California on June 29.

Prince wore the blazer while riding a motorcycle with co-star Apollonia Kotero. Prince died at his Paisley Park estate in Minneapolis last month. He was 57.

Profiles In History president Joe Maddalena tells the Associated Press: “It’s definitely the most important piece of screen-worn Prince clothing that’s ever come up for auction.

“This is a signature piece of wardrobe worn from an iconic movie in his most famous role. Prince memorabilia in general, it just really doesn’t exist. It seems like he controlled it all.

“This is the first time ever for something like this, and it might be the only time because the rest of the costumes may be in his wardrobe.”

The seller says her sister was a makeup artist on the set of Purple Rain and that Prince gave it to her as a gift.

Maddalena adds: “Hopefully it will reach a price that is equivalent to his stature as a musician.”

Minnesota police revealed last week that Prince had prescription painkillers in his house when he died. Carver County Sheriff asked the Drug Enforcement Agency to find out where the star got the drugs, which is said to be a routine check in such cases.

An autopsy to determine the cause of death proved inconclusive and coroners say toxicology reports could take weeks to come back.

The Revolution to reunite in honour of Prince