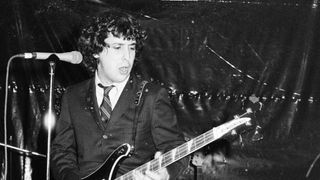 An album featuring legendary guitarist Mick Ronson is to see the light of day 40 years after it was recorded.

Reptiles In Motion was meant to be the second album by US band Roger C. Reale & Rue Morgue, but was never released. It's now finally coming out as part of a package that also feature's Reale's first album, Radioactive. The Collection is released on October 18.

Billboard described the album by saying, "If you liked The Sex Pistols and can remember Chuck Berry, Roger has something for you in the way of rock ‘n’ roll…"

Recording for the follow-up began at the beginning of 1979. “I brought Roger’s record over to Mick Ronson’s house,” says Michaels. “I sat him down and I put on Roger’s record, and Mick was just fixated. No calls, no 'Hey Mick,' he just put his hands up and was hypnotized by the first record. ‘F**king hell, Hilly, this is amazing! Can I play on the next one?’ And I said, ‘Yeah, absolutely, I’m sure you can!'"

“Mick locked in and it was lightning in a bottle a second time," adds Michaels. "Even better, even more thematic and powerful."

Completing The Collection are Close Inspection and a cover of Fontella Bass’s Rescue Me, which originally appeared on the UK release of Radioactive.

The Collection is available to pre-order now from Amazon and Bandcamp.