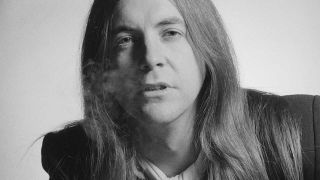 The Pretty Things frontman Phil May has died at the age of 75.

The news was confirmed in a statement from the band’s management team, reporting that he died earlier this morning after being admitted to hospital after an accident.

The statement reads: “It is with very deep sadness that the management of The Pretty Things have to announce the death of the band’s lead singer, Phil May.

“Phil passed away at 7.05am on Friday, May 15 at the Queen Elizabeth Hospital, Kings Lynn, Norfolk. He was 75.

“He had been locked down in Norfolk with his family and, during the week, Phil had suffered a fall from his bike and had undergone emergency hip surgery, after which complications set in.”

The Pretty Things were widely regarded as one of the great UK R&B groups of the early 60s, with their off-stage antics outstipping their friends and rivals the Rolling Stones.

Led Zeppelin manager Peter Grant even considered them “unmanageable” – although they still went on to sign for Zeppelin’s Swan Song label. May was also something of a revolutionary figure, with David Bowie once scribbling the word, ‘God!’ beside his name in an old address book.

May founded the Pretty Things with guitarist Dick Taylor, with the pair then bringing in bassist John Stax, drummer Pete Kitley and guitarist Brian Pendleton for their first official lineup.

Their self-titled debut album arrived in 1965, and while the lineup was to change down the years, May remained at the helm, appearing on every studio album.

The Pretty Things’s 1968 album S.F. Sorrow is widely regarded at one of the first concept albums and was recorded as May embraced LSD.

Speaking with Classic Rock, May revealed: “What we were attempting was attempted again by different bands later for whatever their reasons were. We started to try to do something different. We tried to change the landscape, and a lot of prog bands came along with totally that intention. They didn’t want to be just rock bands.”

He added: “Acid changed my life. I saw things in a completely different way. The actual visual experience of being on a trip was stimulating. I found I could control what was going on, to a certain point. I would turn taps on and blood would come out. You’d wash your face and you’ve got blood all over it, but you know you haven’t.

“And to know you could go back to the bar upstairs and sit there and talk to somebody and you weren’t covered in blood, but you’d experience it as if you were. Or you’d watch somebody’s head changing shape as you were talking to them.

“It was like a sharpening of the imagination for me. I don’t think S.F. Sorrow would have been impossible without it, but there’s a lot of acid in it, in the imagery.”

The Pretty Things played their last show, The Final Bow, at London’s Indigo at the O2 in December 2018, where they were joined onstage by David Gilmour and Van Morrison.

Speaking with Classic Rock in 2015, May said: “I find bucket lists laughable. But I’ve had an interesting life. I’ve travelled a lot. If someone said, ‘You’re doing Glastonbury next week,’ I’d probably reply, ‘Okay.'

“Life wouldn’t change a great deal. We toured America a lot, but do I want to go back there? I suppose we’ve got to play somewhere. But nothing is gnawing at my soul."

May is survived by his son, Paris May, his daughter, Sorrel May and his partner, Colin Graham.