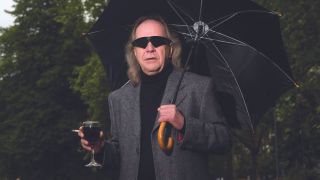 Phil May’s band The Pretty Things were one of the great British R&B groups of the early 60s. Their off-stage antics outstripped their friends and rivals the Rolling Stones – to the point where Led Zeppelin manager Peter Grant considered them “unmanageable” (that didn’t prevent them being signed to Zep’s Swan Song label though).

With his long hair and urchin swagger, the singer was such a revolutionary figure that early fan David Bowie scribbled the word ‘God!’ next to his name in an address book. May has spent 52 of his 70 years fronting the Pretties, and won’t be hanging up his winklepickers just yet.

What was it like growing up on a council estate in Erith, Kent in the forties and fifties?

I think of it as a magic time. There was a certain community spirit, and you really could leave your back door open. But at the age of ten it was quite a shock to discover that Charlie and Flo, who’d brought me up, weren’t my real parents, and having to go and live with my mother and stepfather.

When did you realise that you could sing?

Actually, I wanted to play guitar. I was too shy to sing. I still don’t know why I volunteered, except that Dick [Taylor, guitarist] couldn’t sing. So I fell into it by default.

After being an art student, was there pressure to get a proper job?

Quite the opposite. I received incredible support. Flo scrubbed floors in a pub. And they had to put up with some crap when the band began to make headlines for our long hair.

Back then you boasted of having the longest hair of any guy in Britain.

It reached down to my arse. But our clothes also brought us a lot of attention, especially from labourers. John [Stax, bassist] had a Jimi Hendrix perm and a pair of yellow trousers that made him look like a walking dandelion.

You were eventually forced to adopt something a little more age-appropriate. How did that feel?

David Gilmour [of Pink Floyd], who lived around the corner, and I cut our hair at about the same time, and it felt kinda weird. It was at the time of the Cross Talk album in 1980 which was almost punkish, so we needed a look that fitted that. The visuals always matched the music.

What’s the best drug you have taken?

Acid was great, especially when you relaxed into it, knowing something was going to happen. I liked going into a hotel bathroom and turning on the taps and of course blood would come out – only really it was water. Or you’d be talking to some German bloke at the bar and the top of his head would lift up. You wouldn’t say anything, you’d just watch because it was fascinating.

And the worst drug?

Heroin, though I don’t have much experience of it. The most insidious ones are coke and speed, because they suck you in. But when you consider the damage it’s done over the last two hundred years alcohol is also very destructive.

You’ve had a lifetime of smoking and drinking, and last year you were diagnosed with the lung disease COPD. How are you feeling?

I’m much better now. But cleaning up your act isn’t a cure. The condition is chronic and the effects go on. Now I watch my diet and go to the gym. The last cigarette was nine months ago.

Have you cut out the booze as well?

I’m trying to. But it’s a bit like when you were a kid and your parents forbade you from playing with two particular kids because they were a bad influence. I might’ve given up one of my reprobate mates, but I’m trying to hang onto the other one.

Not at all, not even some higher being. I think whatever guides us comes from the inside. That’s why Zen makes so much sense, it’s all about self-knowledge.

What can Phil May do that nobody else is capable of?

I don’t think I have a unique skill. I don’t have anything to offer in the way that Clapton or BB King, even Dick [Taylor] does. I feel I’m just there… complementing what Dick does on stage. It’s strange.

Well, I’ve never had that much confidence. Some might call me a professional musician, but to me I’m just a gifted amateur. I don’t consider singing a high art form in the way that playing a musical instrument is.

At seventy years old, do you still have unfulfilled ambitions?

I find bucket lists laughable. But I’ve had an interesting life. I’ve travelled a lot. If someone said: “You’re doing Glastonbury next week,” I’d probably reply: “Okay.” Life wouldn’t change a great deal. We toured America a lot, but do I want to go back there? I suppose we’ve got to play somewhere. But nothing is gnawing at my soul.

What do you want to be written on your tombstone?

I’ve nothing planned. I might have pissed a lot of people off along the way but hopefully I haven’t made too many real enemies. So its tone would depend upon who writes it [laughs].