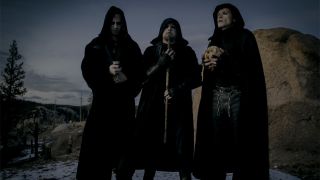 If you’re the kind of person who thinks that Emperor would have been better if they’d just shown a bit more ambition, or thought that Fleshgod Apocalyspse just need a few more strings to their bow then Colorado’s Nightbringer may just be the band for you.

Having turn the dial marked ‘epic’ up to 11, the band’s fourth full-length, Ego Dominus Tuus (Latin for ‘We’ve got massive egos and we don’t give a flying fuck’, probably), is due to turn their Season Of Mist stable into a full-on raging storm when it’s unleashed on September 30th. Not only does it have manufacturers of the pompometer hastily revising their models for expanded capacity, it’s also host to a genuine, awe-inducing sense of urgency, imperiously far-reaching vision and a colossal voice that charges through its sumptuous textures and atonal otherness like an angel of death with an entire planet to see to. Basically, this is one of the most impressive black metal albums to see the light, reject it and cast its cloak of darkness this year, and we are rightly proud to host the entire grand guignol in its full synapse-ravaging glory. Grab the nearest post for dear life, click the play icon below and give yourself to the tumultuous glory that is Ego Dominus Tuus!

Bring the shattered remnants of your soul to Nightbringer’s Facebook page!