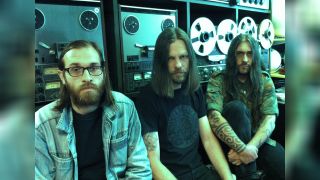 Helmed by former Ramesses frontman Adam Richardson, and co-navigated by members and ex-members of Bong and Capricorns as they set controls for the heart of the sun, wander off to smoke a shit-ton of weed and whatever hallucinogens they can scrabble together, and then come back to find they’re in an entirely different universe while Stephen Hawking is having a meltdown on the intercom, 11PARANOIAS aren’t so much a meeting of minds as a total dissolution of them.

Having released one EP and an album of psychedelic doom so supremely nasty that if they were a drug, even the most destitute Russian wouldn’t smoke it, the trio are about to embark on another quantum leap into the bowel-loosening realms beyond the Rabbit Hole Nebula with a new full-length, Stealing Fire From Heaven, emerging from the opium dens of Ritual Productions on 10th November.

For all those who feel sanity is overrated, we are proud to offer glimpse through the portal in the seven-minute-plus, synapse-melting form of Lost To Smoke. A rippling and lysergically-laced pilgrimage from the darkest dungeons of mind through the kind of propulsive space rock that makes Monster Magnet sound like Oasis to your own personal 2001: A Space Odyssey moment, it will take you to places most other doom bands can’t reach and are frankly pretty relieved about it. Strap yourself in, sign your waiver form and give in to the glory that is 11PARANOIAS below!

And check out the details for their October 30 show with Conan here!