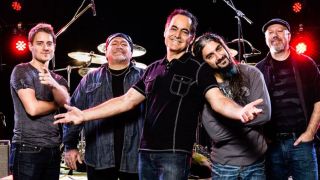 Mike Portnoy has described the upcoming Neal Morse Band record as “the greatest album of my career…our Tommy meets The Wall.”

The as-yet-untitled, double concept album is due for release later this year and drummer Portnoy says is stands up against some of the best concept records ever released.

He says: “Listened to the latest tracking ruff on the upcoming Neal Morse Band album yesterday. I have to say it again – this is the greatest album of my career.

“It is my/our Tommy meets The Wall. Absolutely mammoth and my greatest recorded work, my Desert Island Disc. Can’t wait for you all to hear it.”

The band are lined up to appear on next year’s Cruise To The Edge event, which sets sail from Tampa, Florida, on February 7. They also have a summer tour planned.