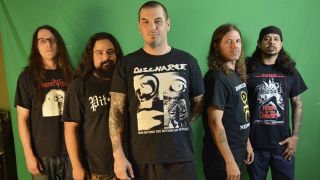 Philip H. Anselmo & The Illegals have had two of their upcoming shows in New Zealand cancelled.

The band were due to play the Club Tavern in Christchurch on March 26 and the Galatos in Auckland the following day.

However, according to Stuff, the venues have decided not to put the shows on following Anselmo’s ‘white power’ controversy in 2016, with the news coming just days after terror attacks at two Christchurch mosques left 50 people dead.

The Christchurch venue said: “The Philip Anselmo gig has been cancelled. We do not and will not support white supremacy or racism!”

Galatos also issued a statement, saying: “Information has come to hand which has made us uncomfortable about proceeding with this show.”

At the Dimebash event in January 2016, Anselmo sparked controversy when he made a Nazi-style salute when leaving the stage. He appeared to say “white power” as he made the gesture.

He claimed he was referring to drinking white wine as part of an “inside joke” and then apologised for the outburst and begged to be given “another chance.”

Anselmo said: “I’m here to respond to all the heat I’ve been getting, that I deserve completely. I was at the Dimebash and it was extremely late at night, there was heavy duty talk between myself and those who loved Dime.

“Heavy emotions were flowing and jokes were made backstage that transpired upon the stage. And it was ugly, it was uncalled for.

“Anyone who knows me and my true nature knows that I don’t believe in any of that. I don’t want to be part of any group, I am an individual.

“I am 1000% apologetic to anyone that took offence to what I said, because you should have taken offence. I am so sorry and I hope you just give me another chance. I love all of you.”