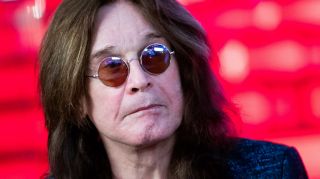 Earlier this month, Ozzy Osbourne has admitted to hospital due to flu complications.

His son Jack checked in last week to let fans know that the vocalist was “doing much better” and now his wife and manager Sharon has given an update on Ozzy's health.

Speaking on US show The Talk, Sharon said: “He's doing great. He’s out of ICU and he’s doing good. He's breathing on his own.

“And I just want to say a huge thank you to everybody that has reached out with good wishes. He is overcome by the response that he’s had, and it’s kind of bittersweet because he’s so overwhelmed with it, but he’s sad too.”

Sharon later tweeted: “Thank you to everyone for all your get well messages and support for Ozzy. We are overwhelmed and truly touched by everyone’s thoughtfulness.”

Prior to being hospitalised, Ozzy was forced to cancel the European leg of his No More Tours 2 run of shows after he was diagnosed with a severe upper-respiratory infection that was in danger of developing into pneumonia.

Ozzy said at the time that he was “completely devastated” at the news, adding: “It just seems that since October everything I touch has turned to shit."

He’s expected to reschedule the cancelled dates in September, with details to follow in due course.

Thank you to everyone for all your get well messages and support for Ozzy. We are overwhelmed and truly touched by everyone’s thoughtfulness.February 12, 2019