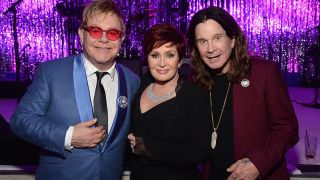 Ozzy Osbourne has collaborated on a new track with Elton John, according to the former Black Sabbath legend’s wife and manager Sharon Osbourne.

She revealed the news on her CBS show The Talk on Monday afternoon after she was asked what 2020 had in store for Ozzy.

Sharon replied: “A lot of good things: Wellness, to get back with his band, and to get doing what he loves which is touring and being out there with his fans.

“Yes, there’s new music and it’s great. He’s got all his friends playing on it and he’s doing a song with Elton – there’s so much good stuff.”

The new track is expected to appear on Ozzy’s upcoming studio album Ordinary Man, which will be released in the near future. While details on the follow-up to 2010’s Scream are still under wraps, Ozzy has released videos for two new songs: Under The Graveyard and Straight To Hell.

Ozzy was forced to postpone his 2019 touring plans twice as he recuperated from his fall at home in April last year, which saw him aggravating an old injury sustained during his 2003 ATV accident.

He’ll make his returning to the stage in Atlanta on May 27 while his other live dates can be found here.

Elton, meanwhile, was celebrating over the weekend when his biopic Rocketman scooped two Golden Globes in Los Angeles on Sunday night.

Taron Egerton won Best Actor In A Motion Picture - Musical Or Comedy for his portrayal of the musician in the Dexter Fletcher-directed movie, while Elton and longtime collaborator Bernie Taupin won Best Original Song - Motion Picture for the track (I’m Gonna) Love Me Again, which also featured vocals by Egerton.

“There is new music and it's great. He's got his friends playing on it. He’s doing a song with Elton [John]. There is so much good stuff.” - @MrsSOsbourne spills on @ozzyosbourne's new music and ‘song with @eltonofficial. pic.twitter.com/GoK725mkhJJanuary 6, 2020