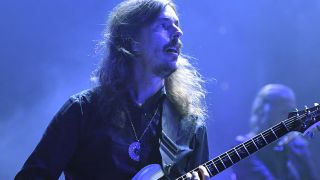 Opeth’s Mikael Akerfeldt says he deleted “30 or 40 minutes” worth of death metal material following the release of 2008 album Watershed.

The band’s ninth record was the Swedish outfit’s last to feature death metal growls, with the band changing their musical style for 2011’s Heritage.

Akerfeldt says he had written songs in a similar vein to the material on Watershed, but a conversation with bassist Martín Méndez caused him to reconsider – a move which continues to shape the band’s more progressive sound.

Akerfeldt tells Revolver: “I can still play death metal when I want to – I do when we play live – but it just came to a screeching halt. I almost made a mistake. I almost wrote another record like Watershed, but I was stopped by Martín Méndez. He said, ‘This is not what you should be writing.’

“I think guitarist Fredrik Åkesson, who had only been on one album at that point, was a bit shocked because he's a metal guy. But not the other guys.

“We bonded so much during the writing of Heritage. But I did write a good 30 or 40 minutes of Watershed-type Opeth music. But when Martín spoke up I just said, ‘Thank you,’ and deleted it. And started Heritage.”

Akerfeldt says death metal means a lot to him, but adds: “Our death metal, if you will, culminated with the Watershed album. And then I was done with it. I couldn't do it any more. I couldn't do anything better. I wasn't listening to anything with screaming vocals apart from the old shit. So I wanted to get closer to the person I am.”

Opeth will release their new album In Cauda Venenum on September 27 through Moderbolaget / Nuclear Blast and head back out on tour across the UK and Europe throughout October and November.

Opeth: In Cauda Venenum
Opeth are preparing to release their new studio album In Cauda Venenum at the end of this month. The follow-up to 2016's Sorceress features the lead single Hjärtat Vet Vad Handen Gör / Heart In Hand.View Deal